The Co-op decision making process is specified in the Bylaws Article IV section 7 which states:

There shall be one vote per regular adult member per household. At every meeting of the regular members, each member present shall have the right to cast one full vote on each question, and a question brought before such a meeting will be decided by consensus minus one. All questions shall be decided by the above system unless the question is one upon which, by express provisions of Statute or the Articles of Incorporation, these Bylaws, or the EBHC Handbook, a different vote is required which case such express provision shall govern and control.

Decisions made by the General Membership

Decisions made by Committees

All committee decisions shall be made using consensus minus one (modified consensus).

Consensus is a process for group decision-making. It is a method by which an entire group of people can come to an agreement. The input and ideas of all participants are gathered and synthesized to arrive at a final decision acceptable to all.

A proposal for resolution is put forward for discussion. It is amended and modified through more discussion, or withdrawn if it seems to be a dead end. During this discussion period, it is important to articulate differences clearly. It is the responsibility of those who are having trouble with a proposal to put forth alternative suggestions.

When a proposal seems to be well understood by everyone, and there are no new changes asked for, the facilitator(s) can ask if there are any objections or reservations to it. If there are no objections, a member formally makes a proposal saying, “I propose….” An additional member seconds the proposal saying, “I second.” The facilitator(s) call for consensus saying, “call to question”. Members show agreement or disagreement using hand signals described below. A proposal is adopted according to Modified or Full Consensus as outlined below.

If a proposal is not adopted, the group can modify the proposal and try to reach consensus (either in the same meeting, or in a future meeting). If consensus cannot be reached, the group stays with whatever the previous decision was on the subject, or does nothing if that is applicable.

In the spirit of consensus, co-op members are expected to listen to each other’s concerns and try to modify proposals in a way that will satisfy everyone’s concern. This is particularly true at the committee level, where a small number of people could try to steamroll the objections of a fellow member. It is not consistent with the principles of consensus to ignore a member’s concerns.

A proposal is adopted if less than two members oppose or block consensus. For the purposes of Consensus Minus One, three stand-asides count as one block. This also called “Modified Consensus.”

A proposal is adopted if no members oppose or block consensus. For the purposes of Consensus, three stand-asides count as one block.

Thumb-up: agreement. Occurs when a person agrees with the proposal

Thumb-to-the-side: stand-aside. Occurs when a member cannot personally support a proposal, but does not feel the proposal will harm the group. HOWEVER, three (3) stand-aside votes are equivalent to one block, defined below.

Thumb-down: block. Occurs when a member cannot support a proposal, AND believes that allowing the proposal to pass will cause significant harm to the group.

Hands-Behind-Back: abstention. Signifies either: a) lack of information, or b)

a conflict of interest. 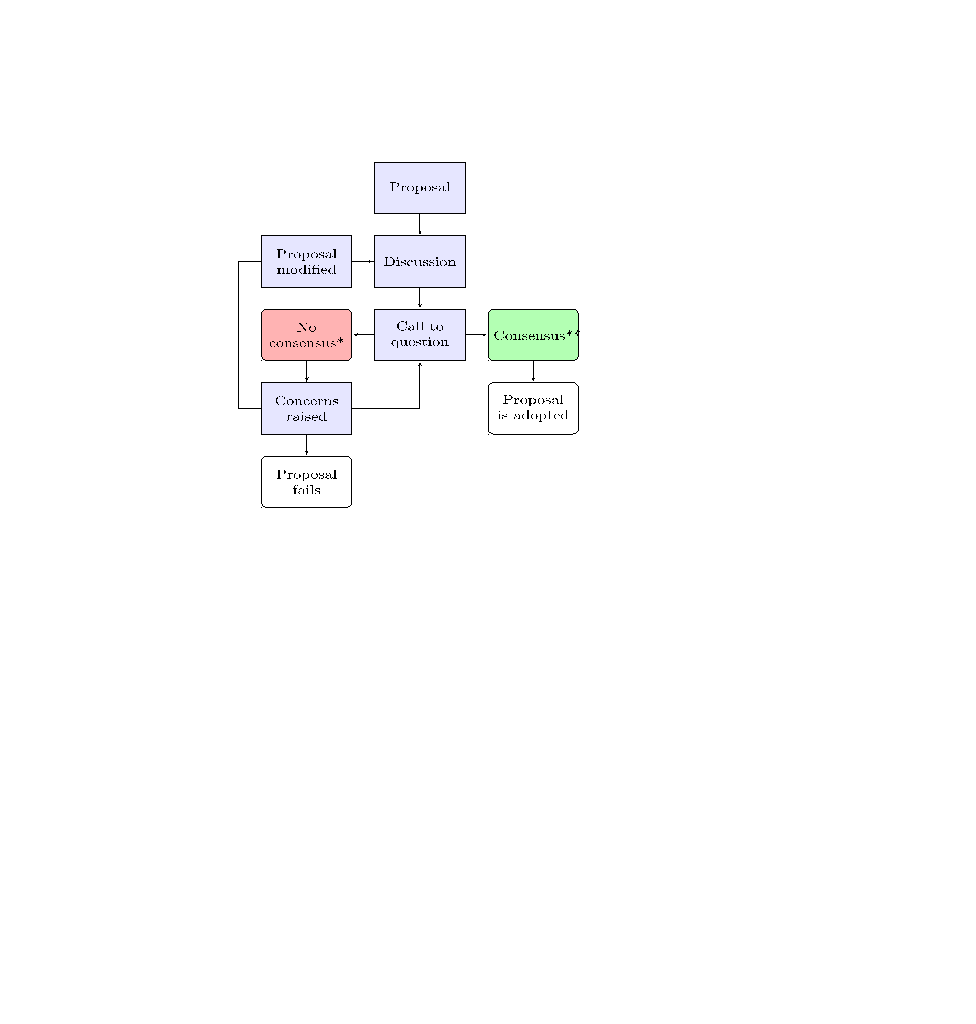 See Handbook section “HOW TO MAKE A PROPOSAL” for voting requirements, quorum, step-by-step instructions for making a proposal and amendments

See Bylaws section XI for how to amend the Bylaws.

Approved May 20, 2018. This document replaced an older document with the same title.